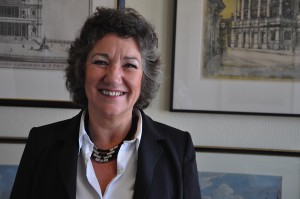 The event took place on Monday 27th of January 2014 in London with the Prime Minister, David Cameron also in attendance. He answered questions from the audience, with a particular mention on eradicating red tape for small businesses.

Chancellor of the Exchequer, George Osborne MP, was also present at the conference. He was networking and chatting with delegates.

Bev, who was recently awarded a CBE for Services to Enterprise was joined by three others on the afternoon panel session. Minister of State for Skills and Enterprise, Matthew Hancock MP, CEO Young Enterprise, Michael Mercieca and Holts Group Chief Executive, Jason Holt.

The open question and answer session was chaired by newsreader Maxine Mawhinney of the BBC. The panel discussed various topics under the agenda including –

During the debate, Bev stated: “We have forgotten to touch on an issue here – information technology is a critical component for education. We need to see a focus on this.”

On a final note, she was bang on point when she stated that – “schools need to have enterprise included in their curriculum, and it needs to be a mandatory part of Ofsted’s guidance and review.”  This is on the government’s agenda for Ofsted, but guidelines have yet to be produced.