Outset CIC delivered the "New Enterprise Allowance" programme in Wessex. This programme allowed job seekers to explore enterprise as an option during the first months of trading without losing the equivalent funding they would have received from their Job Seeker’s Allowance. Their business idea was assessed for the viability while on JSA and, if their business plan was sound, they were given further access to a mentor and once they started trading, access to the Enterprise Allowance and Exclusive Loan Fund.

For the latest information, please visit the Outset CIC website.

Here a few examples of our NEA Wessex success stories:

One of the hardest decisions our clients initially face is choosing the focus of their new business. We work with our clients to draw from their own experience and explore their existing skill sets such as cooking, cleaning, arts and crafts as well as any other previous professional experience they might have. For Rachel Filmer, a passion for baking and cake decoration led her to investigate her hobby as a potential business:

“I had a career in publishing and events before I left to start my own business. Due to health problems, I was struggling to work in a normal full-time job – I was working in a very demanding role for a large international festival, with very long hours and high stress levels. After four years, I decided I wanted to find something that was more flexible and would allow me to move back home to Bournemouth. I had taken several similar cupcake classes in London and taught a few friends – I realised it would make a good and flexible business.”

Rachel was referred to Outset NEA through Jobcentre Plus with a business plan already in place. She was assigned a mentor who helped her strengthen her plan around problem areas such as accounts and taxes, something she felt was invaluable: “I got lots of great advice and assistance with these issues which helped me to keep going during difficult times – thanks to this advice, I managed to make a small profit in my first year and a much better profit this year.”

Through her efforts, Let’s Make Cupcakes was born: “I hold regular cupcake baking and decorating classes in Bournemouth. My customers are a very diverse group – I’ve had everyone from young mums who have never baked before, retired teachers, head chefs, those looking to start their own business and everyone in between.”

The business has now been trading for eleven months and is going from strength to strength. Getting there was not all tasty cakes and sweets however. Rachel explained that there were many challenges along the way:

“After working in jobs that were very focussed on specific tasks, it’s difficult to learn every aspect of running a business. You have to be able to do your own marketing, PR, accounts, stock management and sourcing. However, it’s nice to be in charge of everything yourself and feel like you are in control of the direction your business is going.”

Marketing the business also proved difficult as Rachel had no budget to speak of. Instead, she had to think creatively and use what resources she had, namely delicious baked goods: “When I launched, I got lots of coverage by inviting journalists to my classes in exchange for reviews in local publications and on websites, and doing interviews. I haven’t done any paid advertising yet!”

One potential pitfall that is often overlooked in new business owners is time management. As the business progresses, you enter in to a catch 22 scenario where the more successful and therefore busier you get, the harder it is to develop new products and get all of your paperwork and marketing done. Rachel told us that she had experienced similar problems when she expanded her business to include freelance teaching in a ‘cupcake school’ in London:

“Teaching baking has been fantastic experience and is a direct result of starting my own business, but it also takes time away from my own classes – I’m often ordering stock or responding to queries for my own classes during the lunch break of classes in London, so you have to be very organised and good at juggling lots of things at once!”

At the heart of any local business is the community that it serves. Rachel tries to use local suppliers wherever possible, and regularly donates gift vouchers or cakes to local charity events. She has also seen “at least three” of her students open cake-making businesses themselves – a testament to her own ability to instil her passion in to others.

When asked about her plans for the future, Rachel said that she is “working on a range of new classes for next year, and would like to expand into a wider range of craft classes (such as knitting, crochet, embroidery etc). In the longer term, I would love to open schools in other locations and possibly look at franchising the business.” 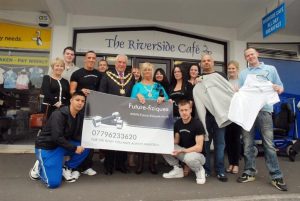 Most clients who complete the Outset NEA programme have typically overcome their own, personal challenges when starting their own business. For Faisel Ghazghazi, the challenge of finding a job after being tarred with the brush of a criminal record was significant and frustrating.

“I spent most of my life in and out of prison. I was released in December 2011 and initially found it difficult to gain employment due to my criminal record. This is what prompted me to launch my own business.

“I wanted to do something for myself and have total control of my future. With the help of Outset and The Prince’s Trust, I have been able to do this.”

Faisel was referred to the NEA programme and assigned an Outset mentor who guided him through the process of starting his own business.

“My mentor was around to advise me whenever I had difficulties.” He said. “This was very helpful and lifted a huge weight from my shoulders knowing that I was not alone and that I had support if I needed it.”

Over several sessions, Faisel prioritised the needs of his new business and created an action plan to meet these needs. He also worked with Outset’s partner organisation, The Prince’s Trust, to secure a £1700 loan and £300 grant.

“The main challenge I encountered was keeping myself motivated through the initial business growth and the worry that it would not succeed.” Faisel said.

As the business progressed, there was a growing interest in his work, especially around his contributions to the community. His efforts were eventually rewarded by being featured on ITV news:

“I do a lot of volunteer work mainly teaching youngsters boxing whilst trying to get a positive message across at the same time. The equipment that Outset NEA and The Prince’s Trust funded has enabled me to make a real difference to my community and the lives of the kids I work with. A couple of the guys also donate their time to assist the club’s efforts.”

In the three years that have passed, Faisel has made a name for himself through his community work. He continues to hold training sessions at venues around the south west, including YMCA Bridgwater, YMCA Taunton and Street Somerset, with a new class planned for Wellington Youth Centre.

When asked to reflect on his experience so far, Faisel admits he is taken aback by the response to his business:

“The difference that my classes have made in these young people’s lives is truly remarkable. During the day, my intention is to work with children who have been excluded from mainstream schools, the homeless and also offenders who are on probation.

“In the evening I will teach Martial Arts to the paying public, running these classes so the club can make a profit and support itself.”

His main goal in 2014 is to open his own club in Taunton and he has already found the perfect venue that he plans to move in to.

“I am very confident this will be a great success as I teach a variety of different martial arts that cater for men, women and children of all ages and abilities.”

“The fact that my club can be run as a successful business is a bonus, but helping others is my number one priority.”

Alan Lee – A & B Garden Design and Landscaping

After a nasty hand injury threatened to put a stop to his work altogether, former quarry worker Alan Lee took charge of his destiny, started a business and changed his life.

“I damaged the tendons in my left hand and arm through an accident. I was in constant pain and was unable to do even the most basic of daily activities. My work suffered and I was unable to continue so I became unemployed for three years.”

Prior to this, Alan had always been interested in gardening as he was lucky enough to have a large garden of his own. Alan’s former work at a quarry had also given him a good knowledge of the different types of stone and their uses in commercial design. As his hand improved, the job centre suggested that Alan looked in to gardening and landscape design as a business idea.

“I had this idea that maybe I could turn something I got a lot out of – landscaping and gardening – in to a real business. Except I didn’t really know where to begin. I wanted to work my own hours and be my own boss.” Alan said.

Through the job centre, Alan was referred on to the New Enterprise Allowance Scheme (NEA) delivered by Outset with the view to turning his accumulated experience and gardening interests in to a viable business. Alan’s mentor immediately identified the potential of the business: “After talking with the client, it was clear that he was enthusiastic about working outdoors, particularly in gardening and landscaping work. We also identified some gaps in his business knowledge that needed to be worked on together.”

Outset worked with Alan to enable him to start his new business. Through working on his business plan, Alan also learned some vital new skills along the way: “The more I learned, the more I realised I didn’t know what I was doing! My mentor was brilliant at explaining things in a clear way that I could understand. So many things that I had often wondered about starting a business suddenly made sense and I felt confident that I could actually go ahead and do it.”

The NEA programme allows you to explore enterprise as an option during the first months of trading without losing the equivalent funding they would have received from their Job Seeker’s Allowance. Clients are assessed for the viability of their business idea while on JSA. If their business plan is sound, they are given further access to a mentor and once they have started trading, they gain access to the Enterprise Allowance and Exclusive Loan Fund.

Out of these initial meetings, A & B Garden Design and Landscaping was born. The business was an immediate success as it was launched in early summer and attracted the summer market where outdoor maintenance and design is usually at its busiest. Alan said: “I definitely feel I started my business at the perfect time of year. It’s now November and I have some regular clients that keep my business going. One piece of advice I would give to anyone is that the time of year you start a business can make the difference between success and failure.”

Since starting up his business, Alan has built a strong working relationship with a solid base of regular clients. “It’s all about going above and beyond for my customers” he says. “A customer will always remember someone who went that extra mile for them and give you more work. They may even refer you to a friend and create more business for you. Either way, my business is going to grow.”